One of the silver linings of the 2020 pandemic was that I got to mind the Haig-Brown House through all of the seasons.  Typically the site manager skidaddles to make room for the writer in residence between November and April, but this year things were not as usual.

Hard to say which season is the BEST.  But for me one of the BESTS is witnessing a gnarled brain like rhubarb poke through the frozen soil to make its spring debut.  Right away it sports its dramatic crimson red stock, not sparing any flair or pizazz. This year, for whatever reason, the arrival of the rhubarb seemed especially exciting. 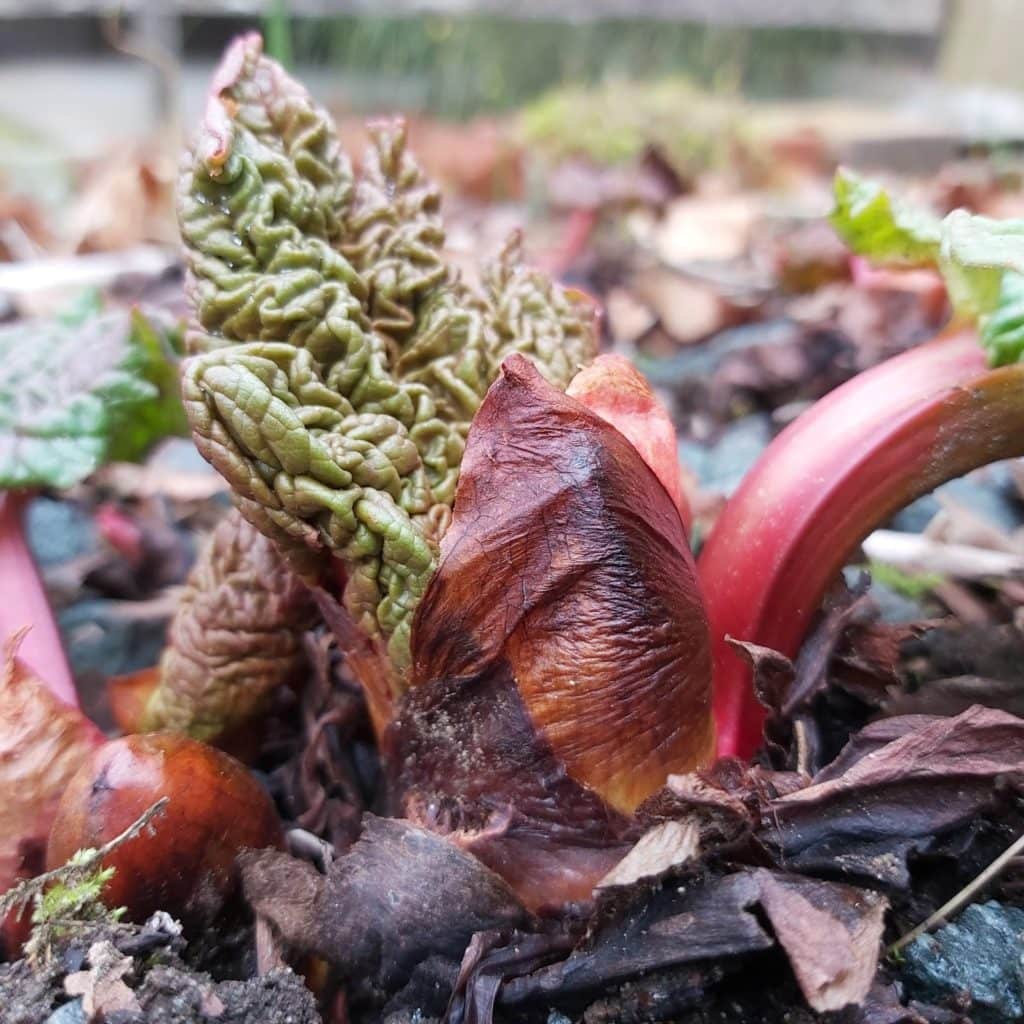 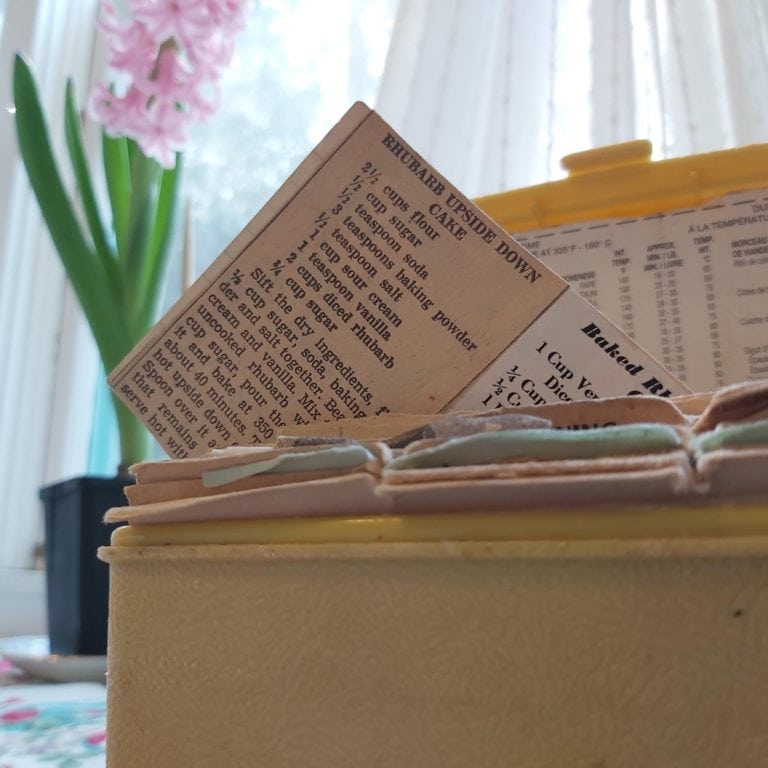 One item that has been loaned to the kitchen temporarily is Ann Haig-Brown’s beloved recipe box.  A kitchen classic with a carefully curated recipe collection, some hand-written, some cut from newspapers and glued ever-so carefully to index cards and filed meticulously by subject, alphabetically, “breads to vegetables.” The cards have been well referenced, and ever-so lightly dog-eared. One wonders about the family stories they keep.

I began searching the recipe box, curious to see if there were any rhubarb recipes.  Much to my surprise, Rhubarb Upside -Down Cake practically sprung from the box with very little investigation!  It makes me wonder, was this maybe a family favourite in the springtime, here at the house?

We reached out to the Haig-Brown “kids”, as we delight in calling them despite being in their 70’s and 80’s these days, to hear their recollections about the Haig-Brown House rhubarb harvest.

My best memories are of rhubarb juice and stewed on ice cream. Here on the edge of the mountains we are still waiting. These days I stew and put it on breakfast yogurt and granola. Still love the colour.

We often had rhubarb upside down cake.  Mother cooked it in the cast iron frying pan and because we had chickens and lots of eggs, she made delicious cakes.

She also made rhubarb juice.  12 lbs of rhubarb and 6 cups of sugar.   Simmer slowly until the rhubarb is very thoroughly cooked.  Then place in a colander and let the juice drain out.  Do not mush it as you want the juice to be clear.  When it is drained, enjoy it as is or dilute it if it is too sweet.  Dilute with water or if there are grown ups with whatever you fancy.”

I learned to love rhubarb from my mother and I have grown it at a house that I owned in Williams Lake and at New West. So my Campbell River memories are layered with others from those two houses. In Williams Lake we placed a pad of baled hay over the plants to protect them from winter’s cold. In the New West we learned to make rhubarb and strawberry pie. But it is that amazing rhubarb juice that stands out from Campbell River. I seem to recall that it was made by boiling the chopped up stalks then placing it in a flour sack and hanging from a can opener mounted on a cupboard over the sink. The juice was collected in a bowl set in the sink. There must have been sugar added but, in those times, girls were taught more of these things than boys.

Oh yes, and I do recall rhubarb with ice cream that my mother would have made with cream from the cow named Primrose.

My rhubarb memories are actually related to the plant itself. When I lived in the hills south of Kamloops, it was one of the successful plantings I managed – the high altitude and hungry moles and other creatures took care of most of the others. With spring came the lovely green with red fat stems poking out of the ground just at the time that the chickens started laying in abundance. I found a recipe for rhubarb custard pie that made perfect, delicious use of both. I have to confess, I never like the juice much. The stewed rhubarb for dessert was fine, but this pie is an all time rhubarb favourite for me.

Maybe that story is too far removed from the river where my first rhubarb tastes were formed, but it has always felt like a part of home that travelled with me.

Recipe for Upside Down Rhubarb Cake from Ann’s Recipe Box

Sift the dry ingredients, flour, ½ cup sugar, baking soda, baking powder and salt together. Beat in the sour cream and vanilla. Mix the diced, uncooked rhubarb with the ¾ cup sugar, pour the batter over it and bake at 350 deg. F. for about 40 minutes. Turn out while hot upside down on a large plate. Spoon over it any rhubarb sauce that remains in the dish and serve hot with a lemon hard sauce. 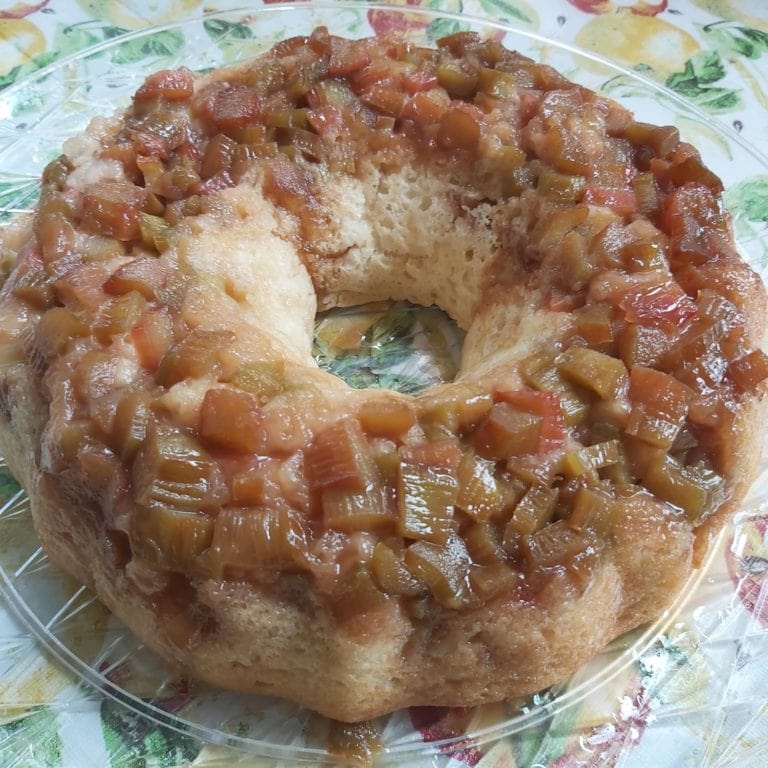 This article is by Haig-Brown House host Marjorie Greaves. The Bed & Breakfast season typically runs from May 1st until October 31st. This year we are waiting to hear updated information from the Public Health Orders before opening for the 2021 season.  This delectable Rhubarb Upside-Down cake is being added to this year’s Continental Breakfast menu.  To book a room or arrange a rental at the Haig-Brown House call 250-286-6646, or Marjorie’s cell at 250-204-5355; or email haig-brown@crmuseum.ca.